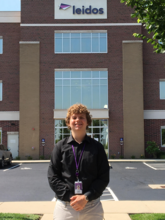 Mechanical Engineering major Logan Blazier is currently interning with Leidos. Logan decided to major in Mechanical Engineering due to his proficiency and skills in advanced mathematics, Computer-aided drafting, woodworking, as well as a general desire he’s had since Middle School. Logan chose Wright State because of its proximity to WPAFB and Government Defense Contractors who create many opportunities in his desired field.

After connecting with a talent acquisition representative from Leidos, Logan was invited to an interview and received an offer letter the week after. Leidos is a defense contractor who serves all branches of the military with key markets in civil, defense and intelligence, and healthcare. Leidos creates leading solutions in challenging mission environments, works on improving care while reducing costs for healthcare organizations, and supports 80 percent of cabinet-level agencies.

Throughout his internship, Logan has learned a tremendous amount about the capabilities of software, especially when it comes to advanced simulations such as Computation Fluid Dynamics and Finite Element Analysis. He has also learned important soft skills such as effective verbal and written communication. In such an advanced and technical field, miscommunication and lack of communication can be detrimental.

For students interested in participating in an internship, Logan has this advice about interviewing:

“Be personal, be friendly, and act like you know your stuff. If you’re in an interview and you don’t know the answer to a question, don’t just say “I don’t know” and move on, that’s like leaving a multiple-choice question blank on an exam. Try and loop it around to something you do know, and really drive it home. Relate the question or problem to something you do know, and talk it up and move on. Even if it doesn’t directly relate, don’t simply say you don’t know the solution to Problem X, instead say you solved a similar Problem Y like this, and elaborate.”