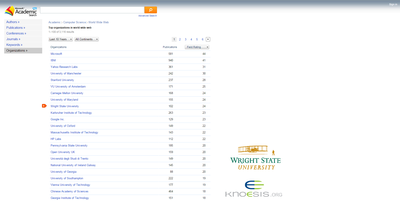 The World Wide Web (WWW or the Web) has been one of the most important high-tech areas. Today’s biggest corporations such as Google and Facebook are all poised in unique positions because they make the Web more useful and provide new functions. In this important area, did you know our own Wright State University ranks among the top 10 in the World based on 10-year research impact?

On Microsoft Academic Search (MAS), a service developed by Microsoft which continuously analyzes publications and their impact, Wright State University shares the seventh position on the list of “top organizations in World Wide Web” based on 10-year impact with Carnegie Mellon University and the University of Maryland. What is equally significant is that all other top organizations on this list are significantly larger than Wright State.

How did this happen? It all started with the founding of the Kno.e.sis Center by Prof. Amit Sheth in 2007 when he joined us as the LexisNexis Ohio Eminent Scholar and brought along 10 of his PhD students. Before this, there was practically no work at Wright State in WWW. The above ranking is underpinned by the equally impressive publication impact of the Kno.e.sis faculty and its students.

Prof. Sheth currently ranks at the very top of the list for top authors in WWW in the world based on 10-year impact, and top 3 for all years. With over 32,000 citations, including 80 publications with over 100 citations each, he also ranks among the top 80 in the world in all of Computer Science for all years, and the top 60 in the 10-year list.

In the context of citations and rankings, Prof. Sheth is most proud about the fact that 11 of his first 18 PhDs have surpassed 1,000 citations each, including 3 with over 5,000 citations each. Average citation for these 18 past PhDs is over 1,400! Reaching the 1,000 citation mark would make most associate and full professors proud, and a majority of PhD graduates of a faculty passing 1,000 citation mark is practically unheard of.  Note that MAS data may not have been updated for the past 2-3 years, but there isn’t another similar list with more recent data is available, -- so this is the best information currently available. Google Scholar data continues to be regularly updated.

When asked to explain this outsized success, Prof. Sheth identifies two reasons. The first is leading with vision, especially the ability to push the boundaries of the field and routinely identify and help define new frontiers. For example, he founded the first startup on semantic search in 1999 (Google introduced its semantic search in 2013) and received the first patent on Semantic Web in 2001; he also introduced the now very popular term “smart data” in 2004, “citizen sensing” in 2008, and “semantic sensor web” (closely tied with one of the most important areas of growth in the Internet of Things) in 2008.

The second reason he identifies for his success is his preference for choosing problems with the potential to make a big impact in human, social or economic development, and then solving challenging technical problems in a multidisciplinary framework.  The latter strategy has resulted in Prof. Sheth winning (as the PI or joint PI) over $5 million in new grants just this year—practically all of them from highly competitive NIH and NSF competitions.

His projects address significant challenges in big data and data science for human health and social good, such as:

1.      “How do you automatically identify harassment on social media?”

2.      “How do you radically reform decision support systems for managing rapidly changing disaster situations by the integrated exploitation of social, physical, and hazard modeling capabilities?”

3.      “How do you identify combinations of online socio-behavioral factors and neighborhood environmental conditions that can enable detection of depressive behavior in communities and study the access and utilization of healthcare services?”

4.      “How do you prevent juvenile repeat offenders from committing crime in the Westwood neighborhood located in the City of Dayton, Ohio?”

5.      “How do you identify emerging trends in cannabis and synthetic cannabinoid use in the U.S., and correlate use with marijuana legalization policies?”